The Mineheart Orange Pencil canvas is one of our most loved pieces of wall art - and now, for the first time, it has been recreated as a wall mural.

Artist Susan Mertens from Utrecht, the Netherlands, was commissioned by a private client to paint a version of the Orange Pencil on their living room wall. She asked us for permission and we were excited to agree - we couldn’t wait to see the results. Susan is a highly talented artist who recreated the image perfectly on a giant scale. The finished mural is 275 x 217 centimeters in size and is fantastically detailed.

Susan also filmed the whole painting process in timelapse and you can watch the image taking shape in the video below. It’s mesmerising to see Susan in action.

How the project came about

Susan’s clients first saw our Orange Pencil wall art on social media and instantly loved it. They enjoyed the unique combination of classical and modern wall art and decided it was the perfect image for their apartment. It’s something they knew would make them smile every day.

Talking about the artwork, the couple said: “To us, the image is about keeping a stiff upper lip, yet enjoying a joke. That's how we both are as people. “We both work in a hospital environment so we’re often exposed to grief and loss. We realise how important a joke can be in staying positive and getting through tough times.

“Plus, we both like to do things our own way. The expression of the woman in the Orange Pencil says to us ‘what are you looking at? I'm just doing my thing!’ - and we love that.” 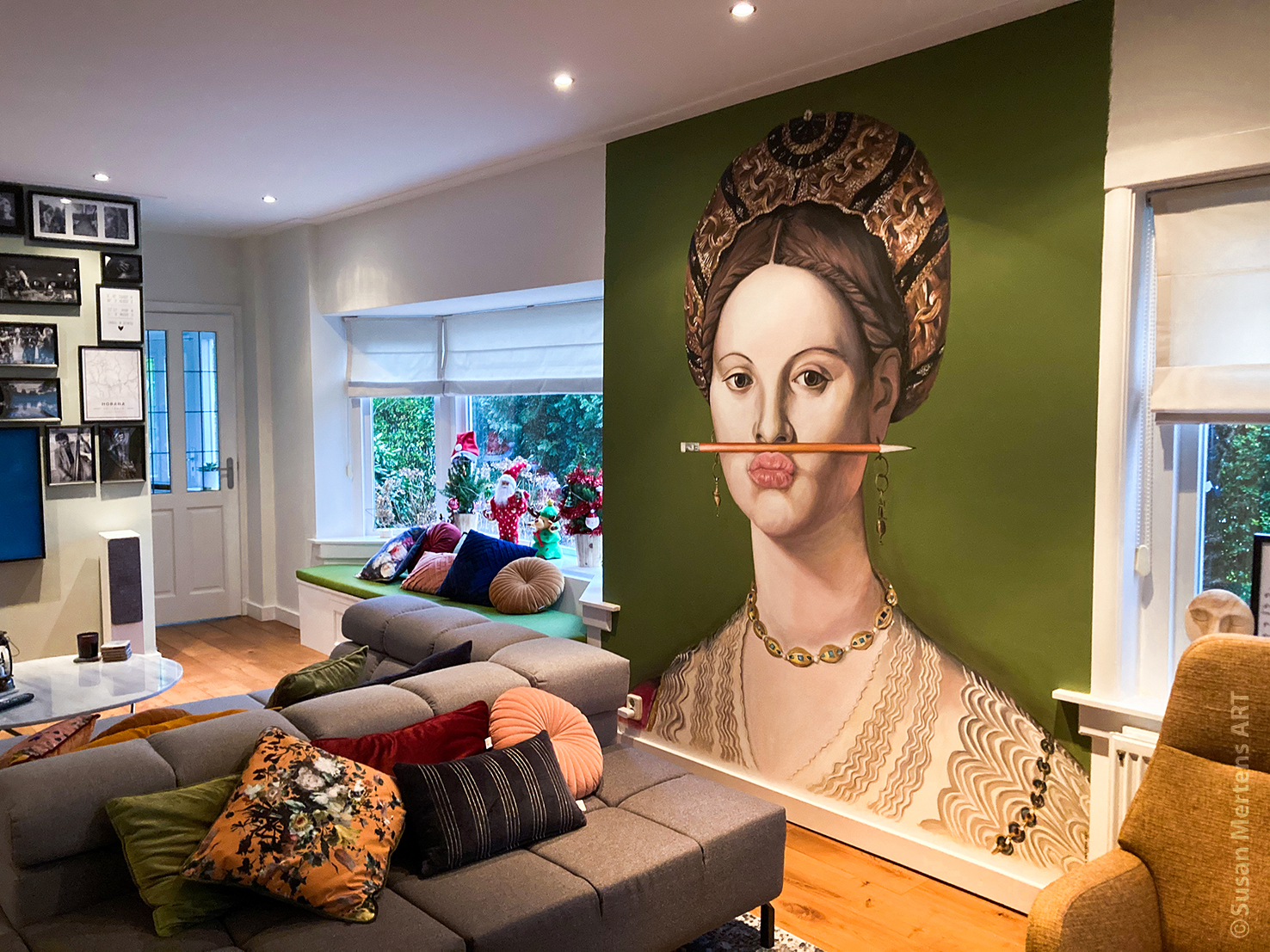 Making the idea a reality

In recreating the artwork Susan used water-based wall paint, mainly the primary colors red, yellow, blue, black and white. She mixed everything directly onto the wall to get the most vibrant and bright result. The process took about five days from beginning to end.

The clients were totally thrilled. They said: “It’s even more beautiful than we expected! There is even more expression in the painting than in the printed poster version. The colors match very well with our interior, which means the painting is very prominent yet at the same time it blends perfectly in the room.” 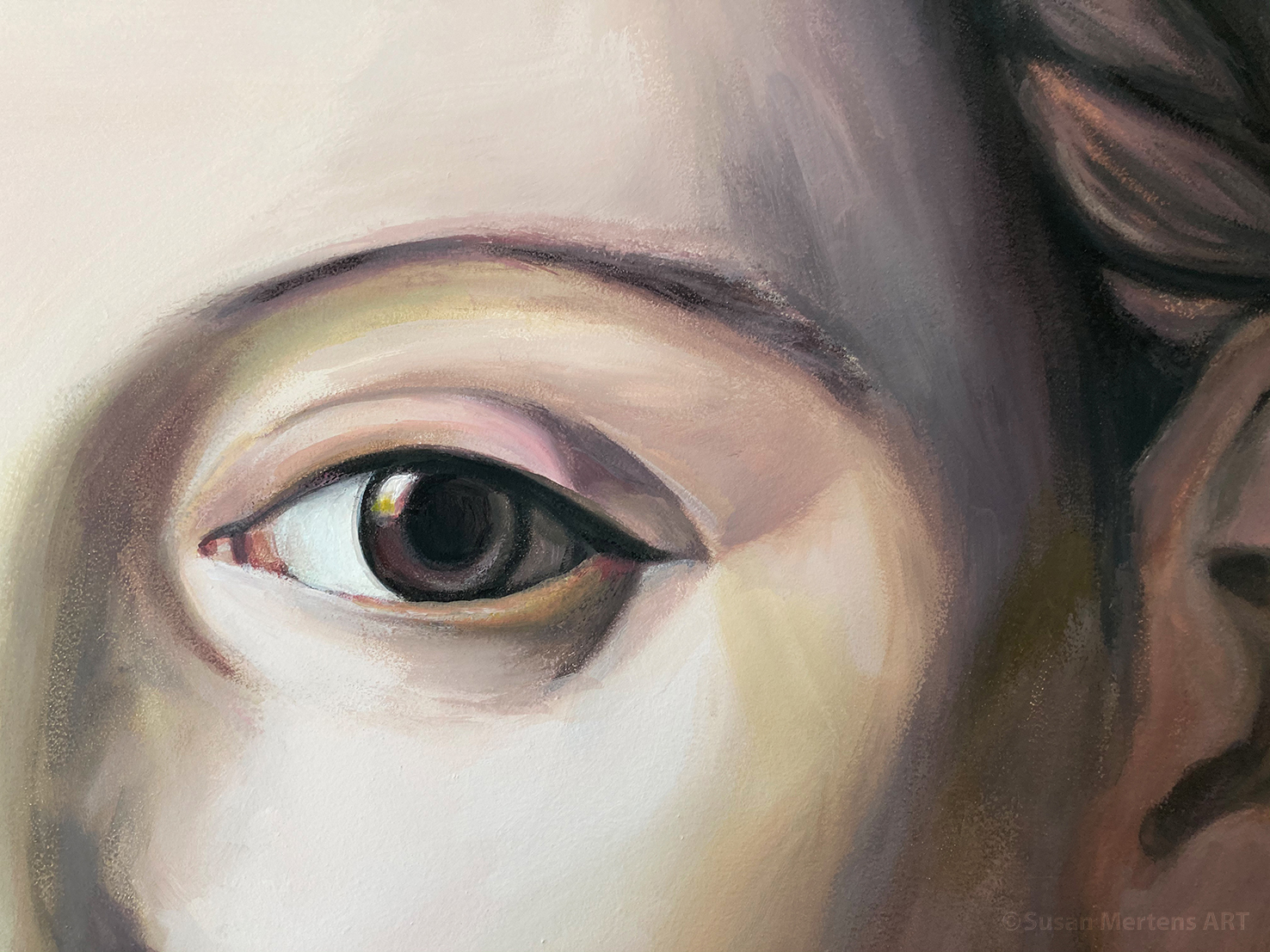 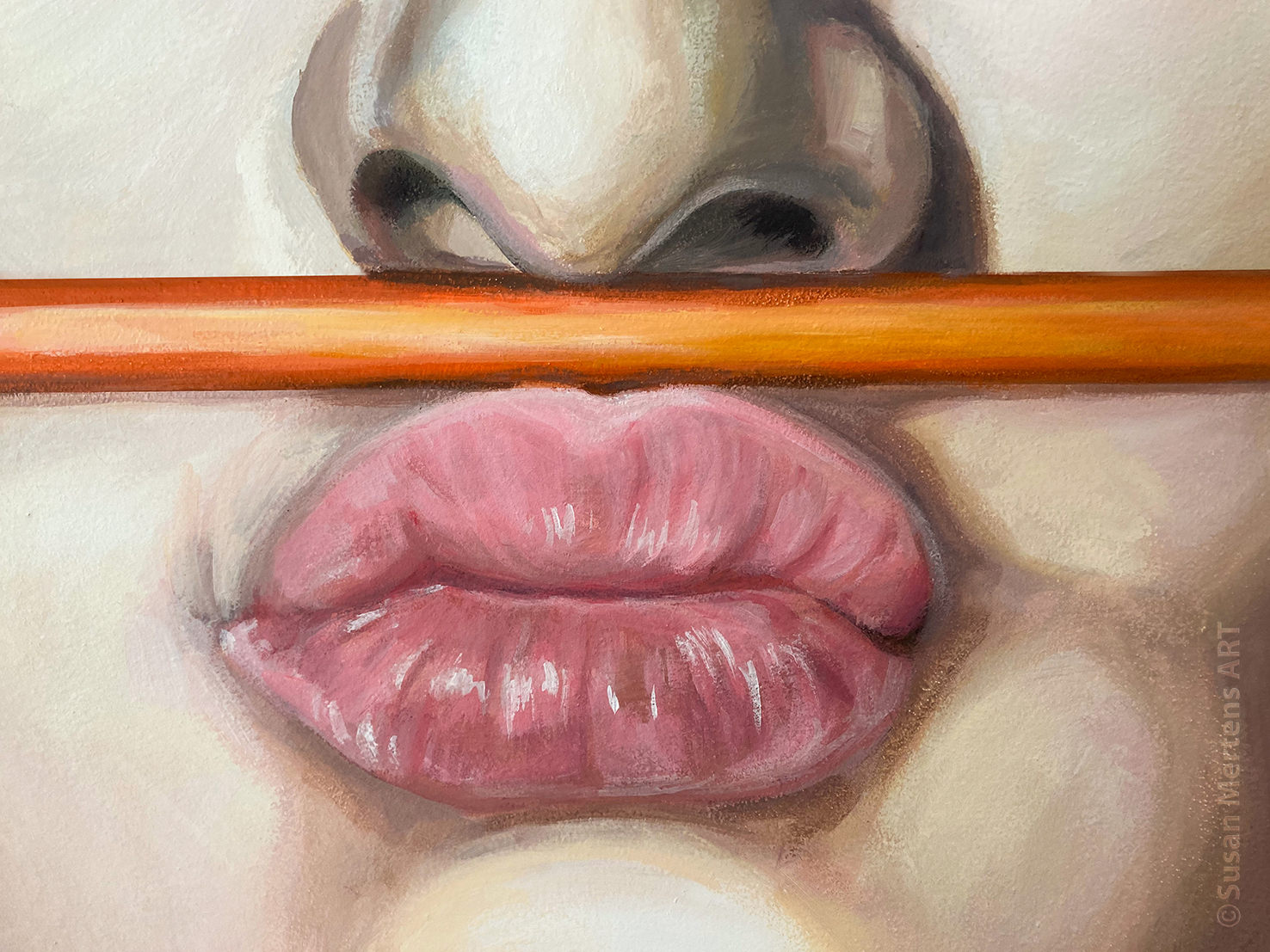 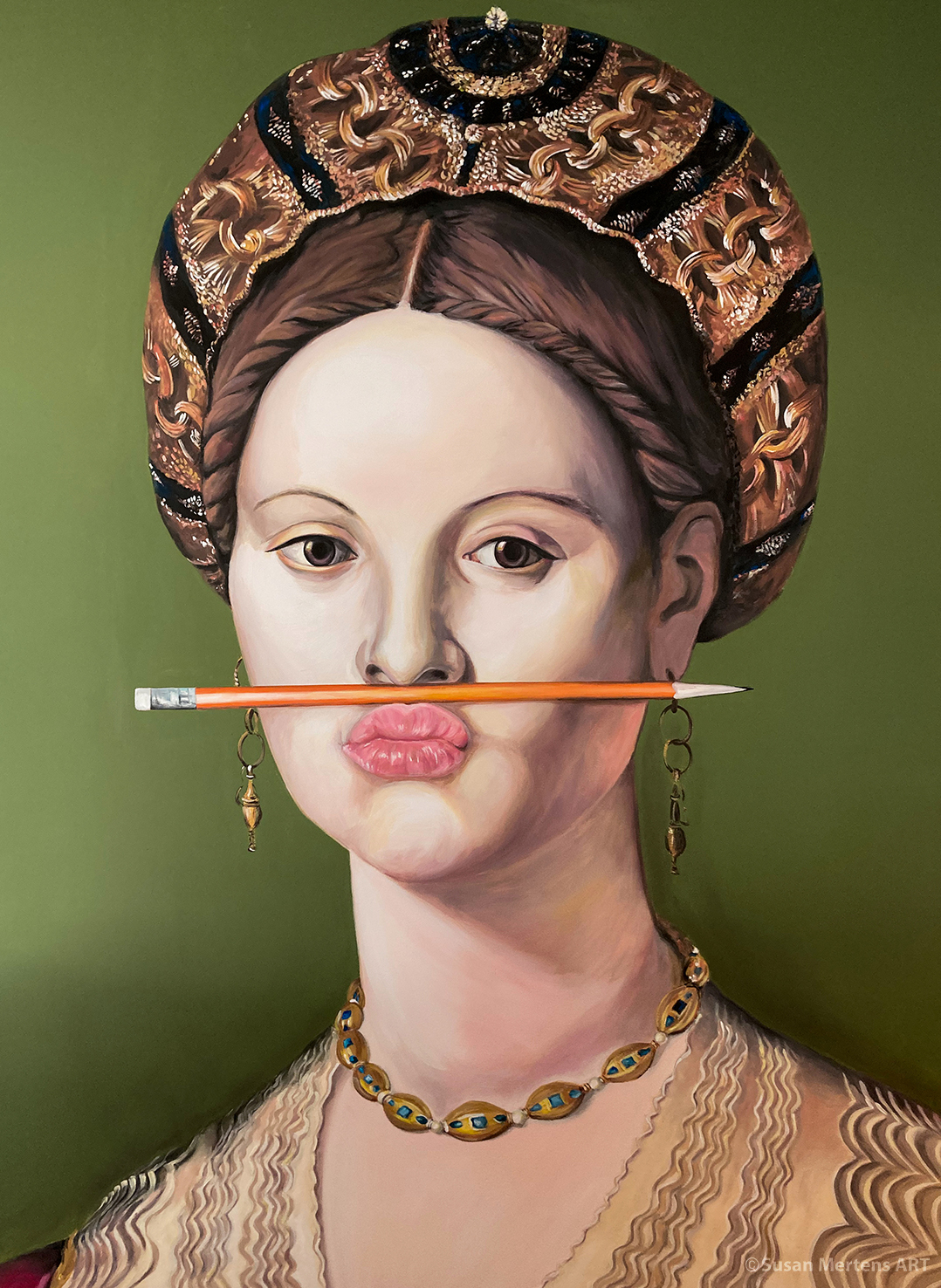 The Orange Pencil canvas is one of Mineheart’s best known and most frequently purchased artworks.

It’s the perfect example of the tongue-in-cheek approach we love in wall art. It’s something we describe as Modernaissance - essentially, blending classical and modern to create something totally unique.

Mineheart founder Brendan Young came up with the idea for this cheeky series. In his own words: "This piece was inspired by a psychological study on the ‘facial feedback’ theory of emotion. In the research, people were asked a series of questions. The researchers had some subjects hold a pencil under their nose with their lips - while some subjects simply answered the questions. Each interviewee was then asked how they felt.

“Those that held a pencil in place were found to feel happier than the control subjects. The research concluded that simply by using our facial muscles - especially those that control our ability to smile - we can actually feel happier."

A pastiche of an Agnolo Bronzino portrait

The Orange Pencil Canvas is based on a portrait painted in around 1540 by Agnolo Bronzino, a famous Italian painter. It’s simply titled A Portrait of a Young Woman and Her Little Boy, and the original is held at the National Gallery of Art in Washington DC, although it’s not currently on display.

Dutch artist Susan, who created our mural version, was excited to view this original - not least because it shows more of the lady’s flamboyant gown. She said “I’ve now seen the original painting of Agnolo Bronzino and it’s fabulous to see the full picture - especially what the woman is wearing! Amazing to see!” 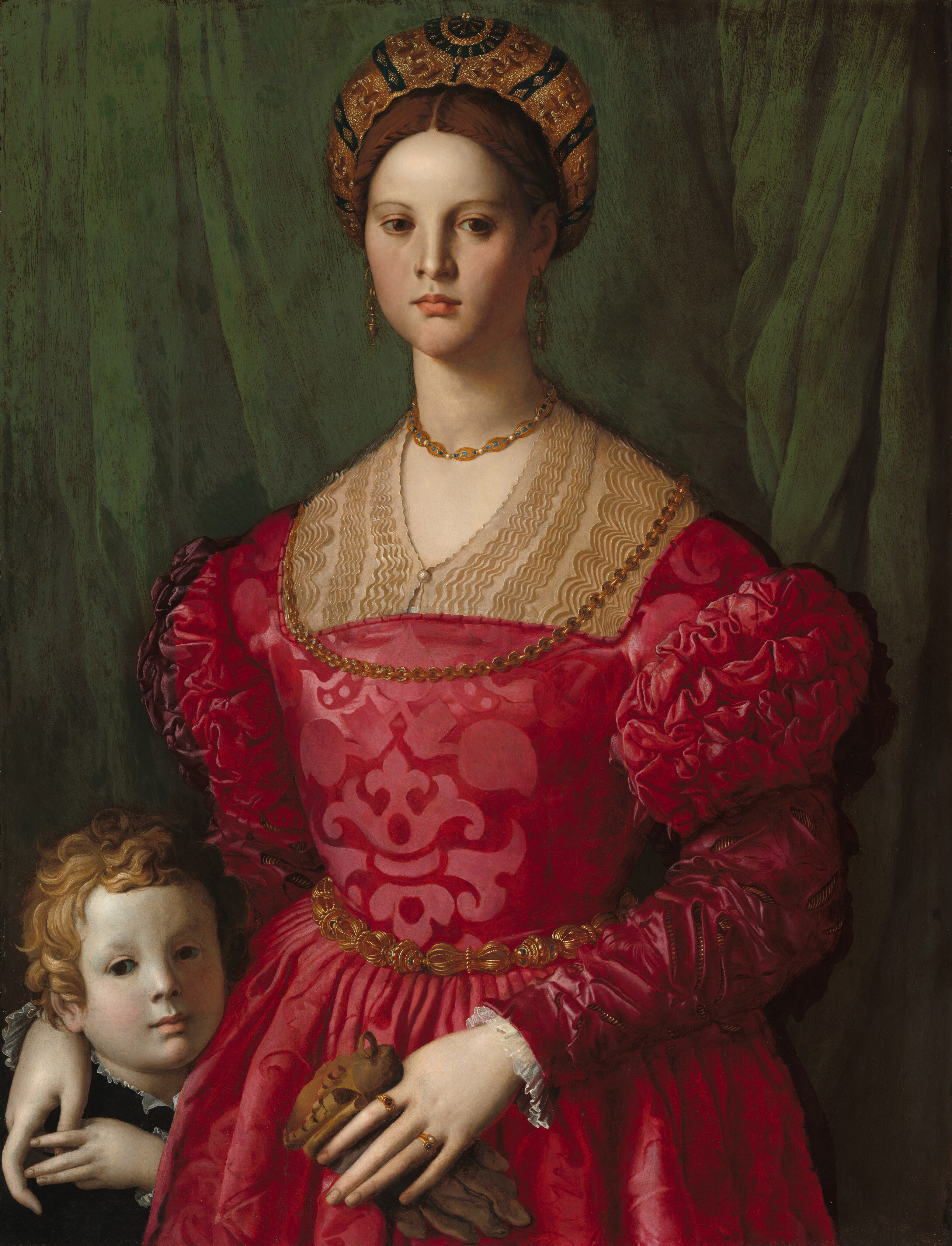 Who is the Orange Pencil Lady?

The painting is of an unknown noblewoman, who is thought to be a member of the court of Cosimo I de Medici, Duke of Florence. Bronzino was the principal portraitist to the court in the sixteenth century.

The lady’s ornate and expensive looking clothing certainly suggest that she is an aristocrat - including an elaborate headdress and wonderfully ruffled sleeves. She holds herself rigidly and with a very controlled demeanour - despite the appearance of a small child at the side of her skirts.

X-Ray techniques have recently revealed that the small blonde boy in the corner of the frame was added much later. He was painted in by Bronzino in a second phase of updates. The lady had originally stood alone with her right hand placed against her dress.

Bronzino also brought the woman's outfit up to date: her headdress grew larger and more elaborate; the puffed sleeves of her dress were widened, the gloves were added and, probably, the damask pattern to the bodice as well.

The appeal of the pencil collection

It’s those historical details that help make the Orange Pencil canvas so appealing. We think that this artwork is so popular because of the way it plays around with the very serious historical portraits we’re so used to seeing.

It’s unlikely that the lady pictured would ever be so silly as to balance things on her top lip. The same can be said for the subjects of our other two pencil portraits - the Purple Pencil canvas and the Blue Pencil Canvas. They are both equally poised and serious looking folk!

We love the idea of adding a little modern personality to classical portraits. If you like the Pencil Collection, you’re sure to enjoy the Bubblegum Collection, depicting aristocrats blowing impressive pink bubbles.

There’s also a very edgy version of the pencil theme in our new posters - featuring skulls in place of Renaissance artworks. 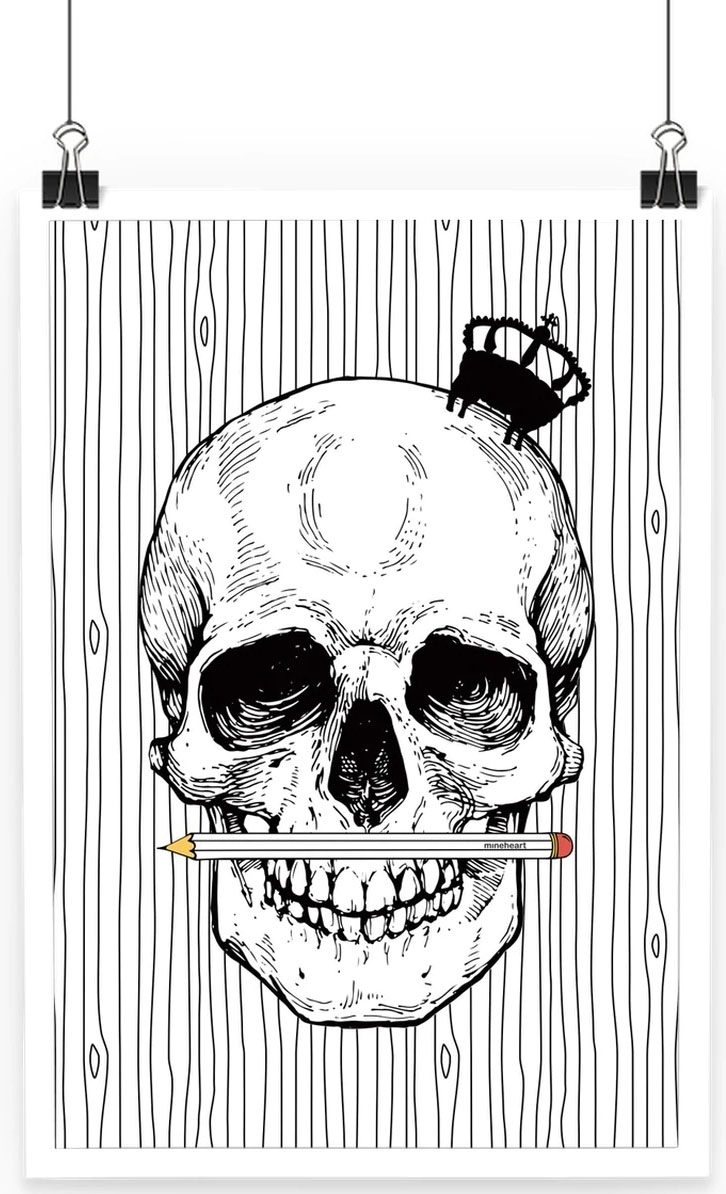 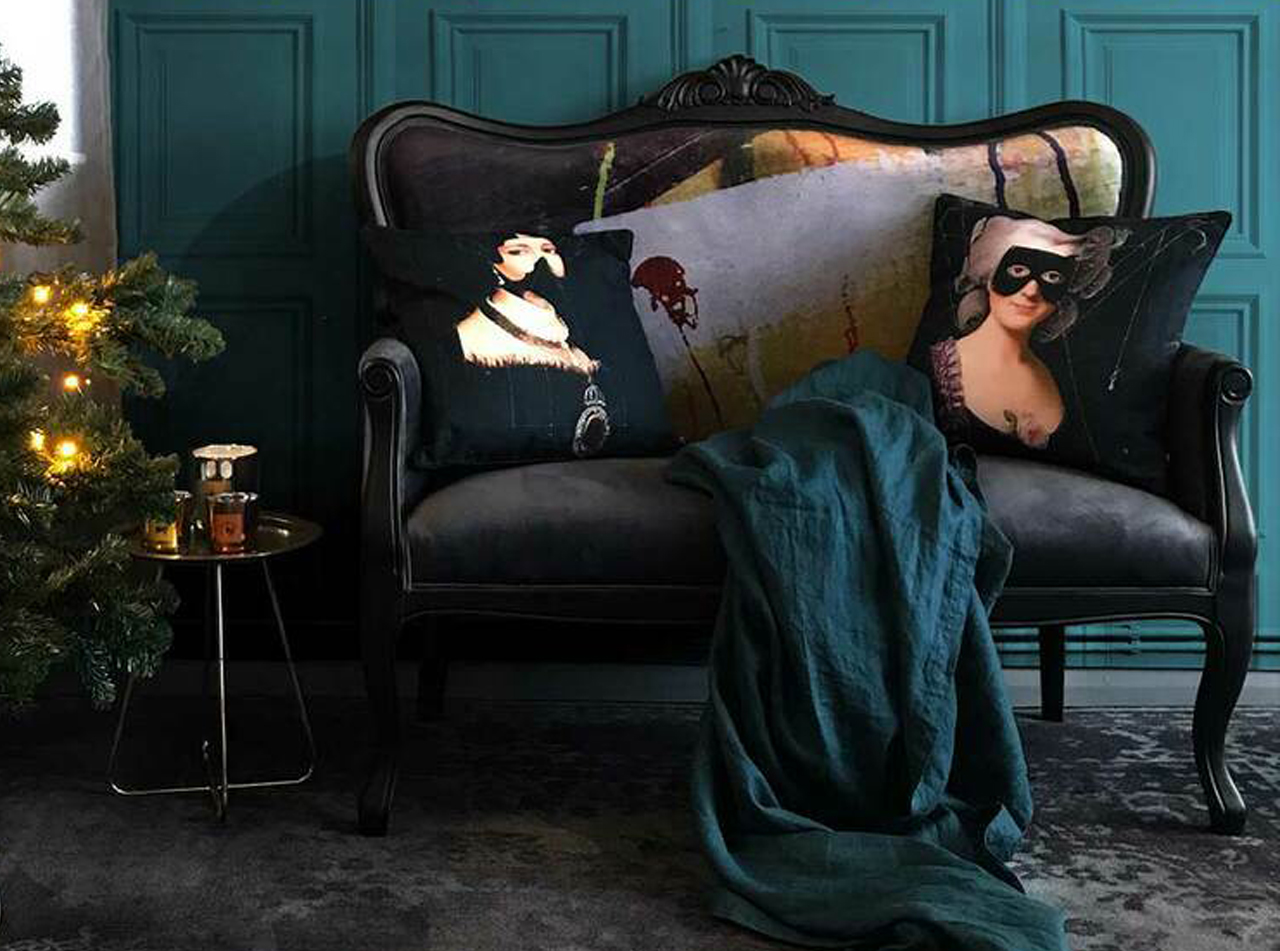 Take a look at our Wall Art collection for more unique canvases and prints for your home.